Gutevolk is the solo project of Japanese female singer-songwriter,Hirono Nishiyama who has been expressing her unique, fantastic and poppy sound. Based on electronic sounds but interspersed with a variety of instruments and sounds, has an original sound that seems to have eaten up various genres such as jazz, rock, French, pop, and ethnic music, and her lyrics in multinational languages, coined words,and onomatopoeia expand her evil pop worldview. In addition to releasing numerous works in Japan and abroad, she has been touring live in Japan and Europe, composing music for TV programs,commercials, and theatrical performances, as well as DJ and creating her own music videos, all at her own pace and with a unique gait. In February, he released his first new album in 20 years, "Fune", under the name of Hirono Nishiyama, and in March, he released "Cover Syndrome ~Western Music Edition~" as Gutevolk. In June, she teamed up with Koichiro Tsujikawa, a video creator, to start the "Mezameru Wakusei” ［Awaking Planet］project, an exchange diary of images and sounds. They have been posting a series of short movies on each other's SNS every morning.

Hirono Nishiyama weaves a mysterious wave of sound catches the edge of my ear. Even If I follow it with my eyes, even if I try to look at it correctly, it is elusive. I think perhaps it’s because Gutevolk is a fairy, named ‘Good people’. She’s taught me ,the music is the same thing as a fairy.
_Haruomi Hosono

How lovely, I wanted to be born with a voice like this. Would you like to trade for mine?
_Akiko Yano

Dwarfs behind my ear entered through Gutevolk’s lips, and they sliding down into her throat tunnel and playing in the universe stretches beyond…That’s how I feel.
_Yayako Uchida

A really warm and friendly sequence of songs, full of subtly brilliant arrangements.
Infused with a sense of childhood, magic and positivity.
You just want it togo on forever.
_Momus 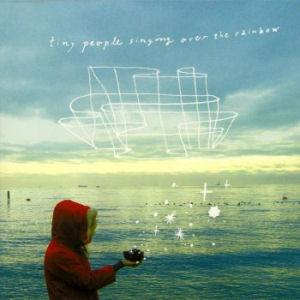